And as Jesus was going up to Jerusalem, he took the twelve disciples aside, and on the way he said to them, “See, we are going up to Jerusalem. And the Son of Man will be delivered over to the chief priests and scribes, and they will condemn him to death and deliver him over to the Gentiles to be mocked and flogged and crucified, and he will be raised on the third day.” 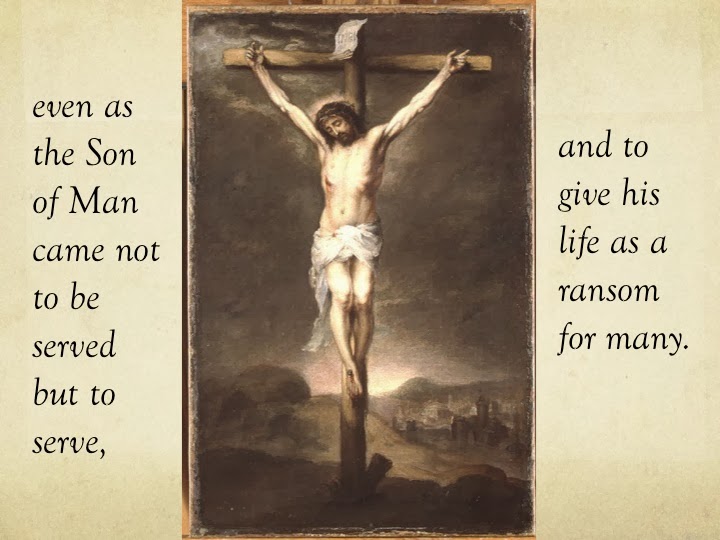 Then the mother of the sons of Zebedee came up to him with her sons, and kneeling before him she asked him for something. And he said to her, “What do you want?” She said to him, “Say that these two sons of mine are to sit, one at your right hand and one at your left, in your kingdom.” Jesus answered, “You do not know what you are asking. Are you able to drink the cup that I am to drink?” They said to him, “We are able.” He said to them, “You will drink my cup, but to sit at my right hand and at my left is not mine to grant, but it is for those for whom it has been prepared by my Father.” And when the ten heard it, they were indignant at the two brothers. But Jesus called them to him and said, “You know that the rulers of the Gentiles lord it over them, and their great ones exercise authority over them. It shall not be so among you. But whoever would be great among you must be your servant, and whoever would be first among you must be your slave, even as the Son of Man came not to be served but to serve, and to give his life as a ransom for many.”

This is the third time Jesus warned his disciples about His impending death and resurrection. He knows exactly who will condemn Him and that they will hand Him over to the Romans. Yet He will rise from the dead. In this warning, Jesus is sharing the barebones, historical facts about the gospel.

The disciples don't yet understand. This is why James and John ask Jesus for positions of power in His kingdom. They still think that the kingdom of heaven is like any other worldly kingdom. They also think of themselves as more deserving candidates than the other ten. Jesus tells them plainly that they are confused and that suffering is the only way to gain positions of honor in God's kingdom. Yet, even then, some positions have already been reserved by the Father. 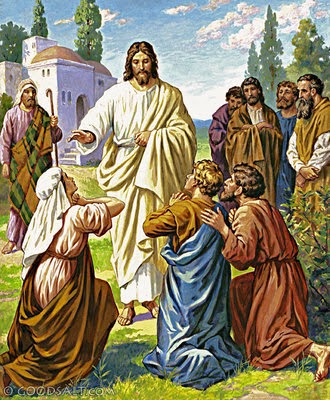 When the other ten disciples get wind of what the sons of Zebedee have asked for, they are indignant at the two brothers. Even though these ten didn't ask Jesus for the highest positions, they too felt that they deserved this high rank. James and John had cut in line. Why should Jesus consider those two over them?

The disciples are full of pride. They are only looking out for themselves, rather than thinking of their brothers. Even worse, they aren't listening to Jesus and the warning He gives. While Jesus has set His face towards Jerusalem... towards His death, they are only concerned about what is in it for them.

Jesus takes them aside to teach them once again that God's kingdom is not like the kingdoms of this world. The great ones will be the servants and the first will be the slave. In essence, God entrusts His kingdom to those who love others more than they love power.

When you seek after the kingdoms of this world, you are distancing yourself from God. This is an issue of pride. If you consider yourself better and more deserving than those around you, then your heart has become prideful. If you ambitiously seek after power and glory, God's kingdom is far from you.

Yet we all do this. We all seek after our own ambitions. We all desire glory for ourselves. We are a prideful lot and we do not deserve any position in the kingdom of heaven. Even when we perform good deeds, we don't have altruistic motives. Deep down, we are always looking out for number one.

Who can rescue us from our sinful hearts? Thanks be to God that He sent His Son not to be served but to serve, and to give His life as a ransom for many. Jesus is the ultimate servant. He went to the cross willingly to pay the penalty for our prideful hearts. He did not seek out His own glory, rather He humbled himself on the cross. He is our substitute. Our pride filled hearts have caused enmity between us and God. We deserve God's wrath. Yet that wrath was poured out on Jesus in our stead.

This is the good news! Trust in Jesus for the forgiveness of your sins. Repent of your pride and unbelief. Put your faith in the only one who can save you. Stop seeking after worldly kingdoms that distance you from God. Seek His kingdom and His righteousness. Christ's kingdom and Christ's righteousness is there for all who repent and believe.
Posted by Unknown at 10:48 PM