CAN CHRISTIANS BE CURSED?

As he passed by, he saw a man blind from birth. And his disciples asked him, “Rabbi, who sinned, this man or his parents, that he was born blind?” (John 9:1,2) 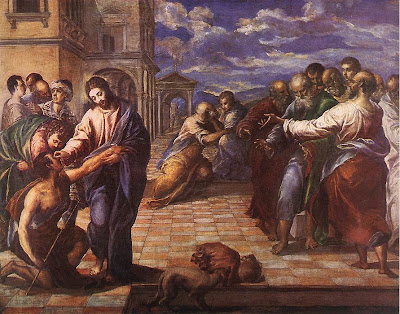 The other day I was involved in an impromptu worship session with a group of people from many different Christian backgrounds.  While I love to fellowship with Christian brothers and sisters, there have been times where I’ve felt uncomfortable about certain things that go on in situations like this.  This last time was no exception.  The worship was paused for a time of prayer.  Without asking for it, one woman was put on the spot by her friend saying she needed prayer.  So she went to the middle of the room where people laid hands on her and one man prayed for her.  Out of nowhere, this man began to pray for release from both demonic oppression and generational curses.  It was at this point that I kind of just shut down emotionally from the group.  Theologically I knew that I was too far apart to continue in true fellowship.
Read more »
Posted by Unknown at 6:38 PM No comments:

And Jesus went on with his disciples to the villages of Caesarea Philippi. And on the way he asked his disciples, “Who do people say that I am?” And they told him, “John the Baptist; and others say, Elijah; and others, one of the prophets.” And he asked them, “But who do you say that I am?” Peter answered him, “You are the Christ.” And he strictly charged them to tell no one about him.

And he began to teach them that the Son of Man must suffer many things and be rejected by the elders and the chief priests and the scribes and be killed, and after three days rise again.

Who do you say Jesus is?  This is the most important question you can ask yourself.  Is Jesus just a good teacher?  Is He just a prophet?  Or is He the Christ, the Son of God?
Read more »
Posted by Unknown at 2:34 PM No comments:

DECIDING WHERE TO LAND

How do you decide where to go as a missionary?  What criteria do you look at to figure out where to land?  This process took a very long time for me.  In fact, I had to be pushed out the door when I moved to Thailand.  I first felt called into missions in 1997, but I didn't arrive in Thailand until 2007.  Why did it take so long?  Part of the reason was figuring out where God would have me go.  Here are some of the steps I took in making this decision.

SATAN KNOWS THE BIBLE BETTER THAN YOU

Then the devil took him to the holy city and set him on the pinnacle of the temple and said to him, “If you are the Son of God, throw yourself down, for it is written, “‘He will command his angels concerning you,’ and “‘On their hands they will bear you up,  lest you strike your foot against a stone.’”  (Matthew 4:5,6 ESV) It occurred to me today that Satan knows the Bible better than I do.   My guess is that he has God’s Word memorized, not only in English, but also in the original Hebrew, Aramaic and Greek.  He probably has it memorized in many other languages as well.  Maybe I’m wrong about this, but I don’t think so. Satan loves to distort God’s Word.  It is his primary way to attack.  He first did it in the Garden of Eden.   He tempted Jesus by twisting the Scriptures mentioned above.  Today he attacks God’s people by bringing in doctrines of demons.  (1 Timothy 4:1)
Read more »
Posted by Unknown at 6:28 PM No comments:

“If your brother sins against you, go and tell him his fault, between you and him alone. If he listens to you, you have gained your brother. But if he does not listen, take one or two others along with you, that every charge may be established by the evidence of two or three witnesses. If he refuses to listen to them, tell it to the church. And if he refuses to listen even to the church, let him be to you as a Gentile and a tax collector. Truly, I say to you, whatever you bind on earth shall be bound in heaven, and whatever you loose on earth shall be loosed in heaven. Again I say to you, if two of you agree on earth about anything they ask, it will be done for them by my Father in heaven. For where two or three are gathered in my name, there am I among them.”